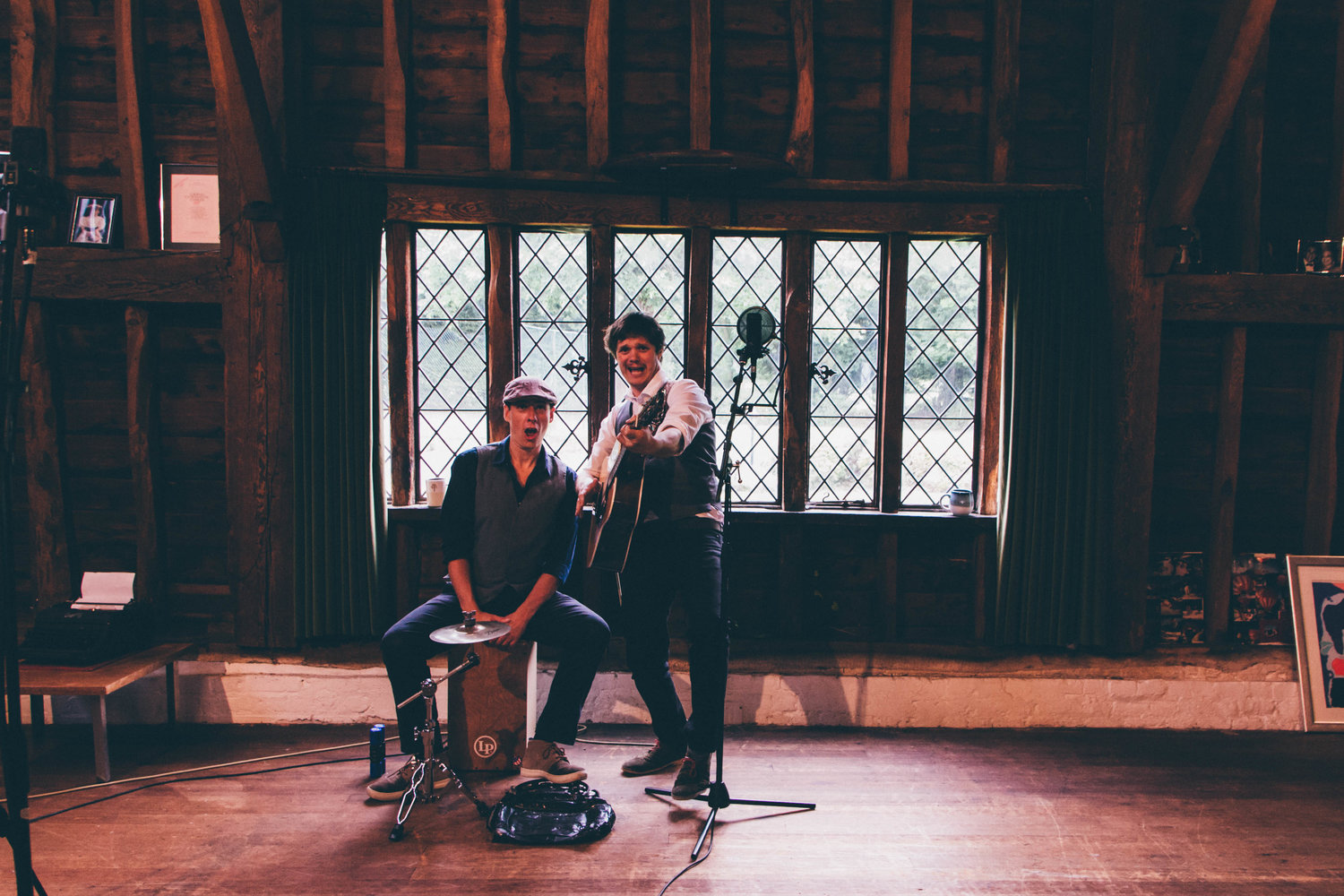 Today we chat with the ever delightful Just Tom & Pete, the UK’s most exciting and energetic acoustic duo available for hire. The guys really are a unique addition to the usual acoustic covers archetype and have consistently impressed with their performances. The boys have a huge year ahead of them with an album release, a full UK tour and a plethora of private bookings and weddings! Let’s find out more…

Tell us a little bit about Just Tom & Pete…

Pete: Just Tom & Pete is an acoustic music experience like no other. With the benefits of an acoustic duo in terms of space, but the sound of a 3 or 4 piece band using only acoustic instruments (no digital wizardry here!).

Tom: Pete used to play with this guy called Luke, but Luke cancelled one night and Pete asked me if I would do it! Turns out Luke had left the band so I carried on.

What do you most enjoy about performing?

Pete: I would have to say it’s the audience and the buzz you get when you know that you’re the major contribution to their good time. I love interacting with them and poking fun as well. I also love the fact I get to work with my best friend.
Tom: You know, I enjoy the friendship the most. I liken our performances to going for a beer or watching the rugby. It’s all pretty natural and when people join in, it’s the best feeling a musician could wish for.

What sets Just Tom & Pete apart from other acoustic duos?

Pete: I think it’s our ability to adapt due to the combination of percussion and guitar. It gives us scope to be as laid back or as musically aggressive as we want. We are capable of sounding like a much bigger band live than two people normally do. I also think our personalities and how we work together is a big part of it as well.
Tom: I guess that friendship. You get our history, our knowledge of each other, the banter, the good and bad times. On top of that you get a pretty unique style of presenting the songs with great musicianship. We want to put on a show for you.

How would you describe each other in three words?

Pete: I would describe Tom as chaotic, funny, loyal.
Tom: The Pete Show.

What is it like to work with Warble Entertainment?

Pete: Working with Warble is great. It was really important to us when choosing an agent that they understood what our goals were. Warble definitely do that, and have been helpful in so many different ways to make sure we are delivering the best product we can. Plus, the team are really friendly and are always there to answer any questions we have.
Tom: They’ve been really great to us. Helped us engage with lots more people while giving space for the act to grow as it should. They take an interest and care in our creativity and presentation. It’s not just about a bunch of booking numbers and money making. 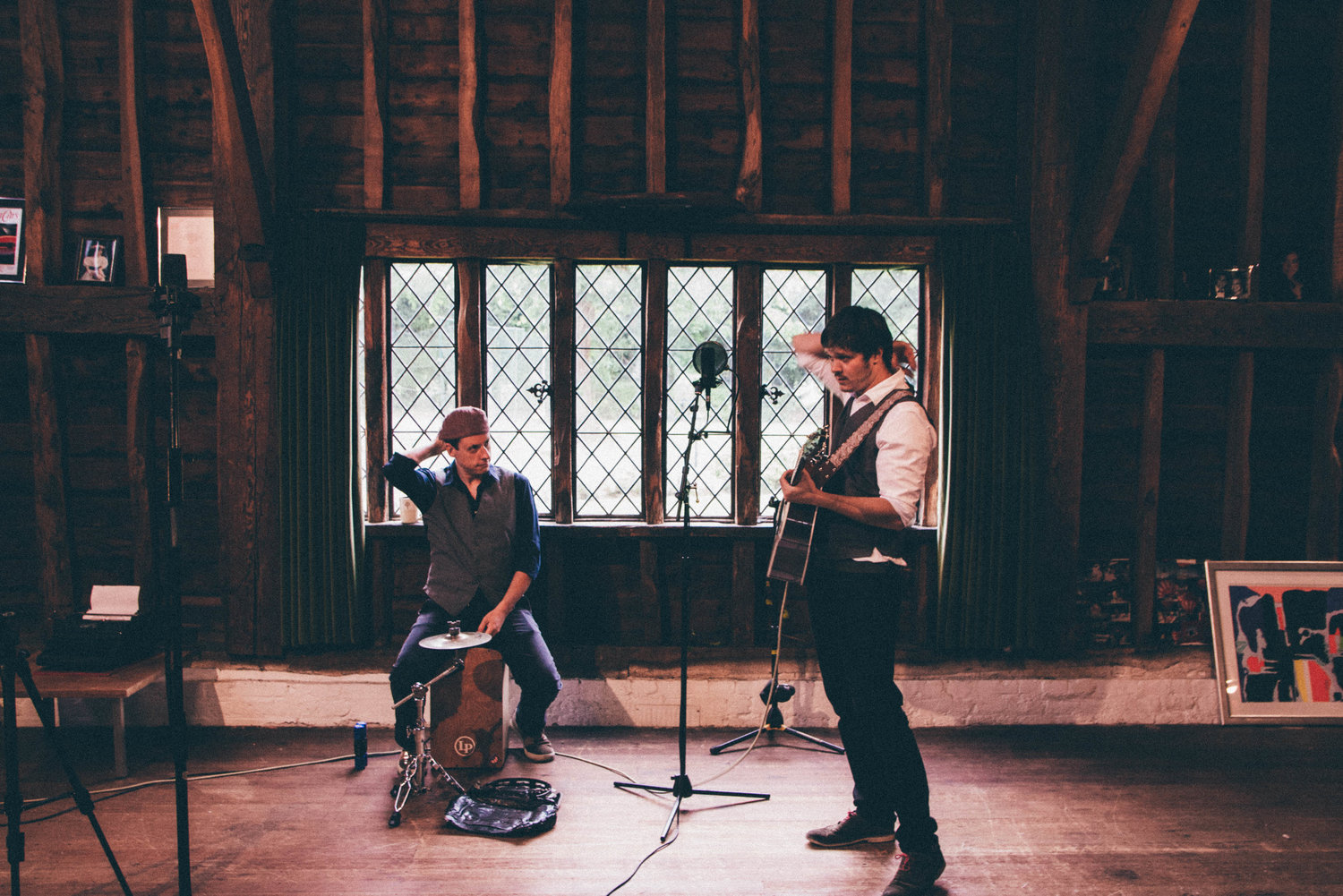 Who’s in control of the music when you’re on the road?

Pete: It depends on who’s driving or whose vehicle we are travelling in. We are both around music for so much of our time together that sometimes, it’s nice to have a comedy or sports podcast on instead. But to be honest we tend to talk to each other quite a lot in the car. Tom has also been know to bring his guitar into the front passenger seat, and practice or write as we roll down the road (obviously not while he’s driving!).
Tom: Mmmm, good question. As a rule, the driver and the drives are fairly evenly split.

In 3 words, describe what a typical performance from Just Tom & Pete is like… 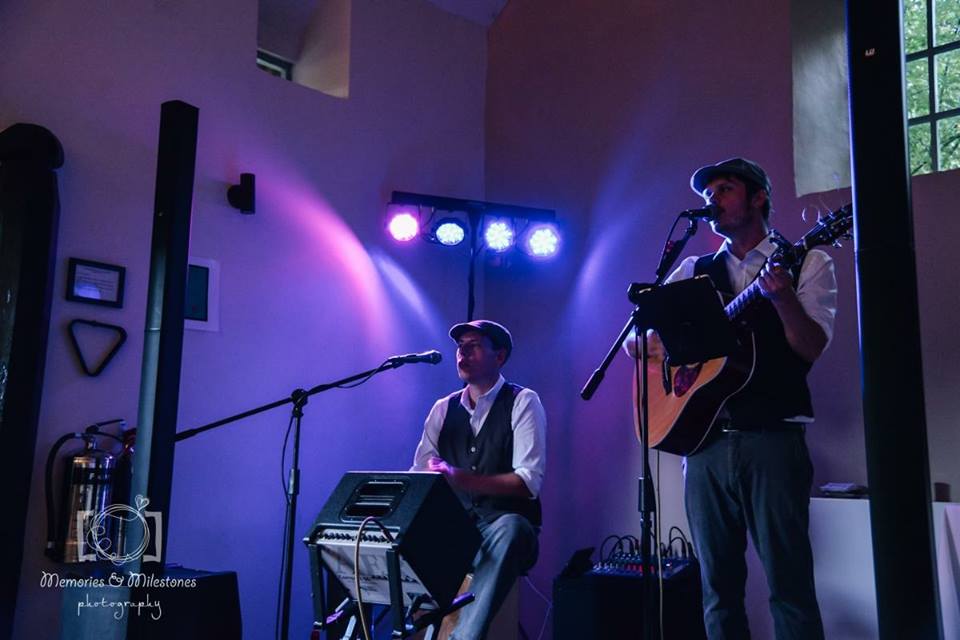 Do you miss each other when you’re apart?

Pete: Hmmm, that’s a tricky one. Not really, to be honest we are never really apart for that long and even when we are not together, we tend to talk a couple of times a week on the phone. But time apart is good. Even when you get on with someone really well, it’s healthy to do other things and occasionally work with other people too.
Tom: It’s probably true that we are never apart long enough for this to be a factor; yet yes.

How do just the two of you sound so ‘big’ when playing live?

Pete: Well I think that’s due to a few things. Our use of the Cajon and making sure our PA utilises what a huge sounding instrument it can be. Song choice has a lot to do with it as well as the way we perform with lots of high energy. Tom has this huge vocal range as well that brings a lot of depth to our show.
Tom: As well as having a fantastic sound system, we simply just know how to rock it. Biologically too, we have strong lungs, hands, and arms, not forgetting flexible knees for the bounce. 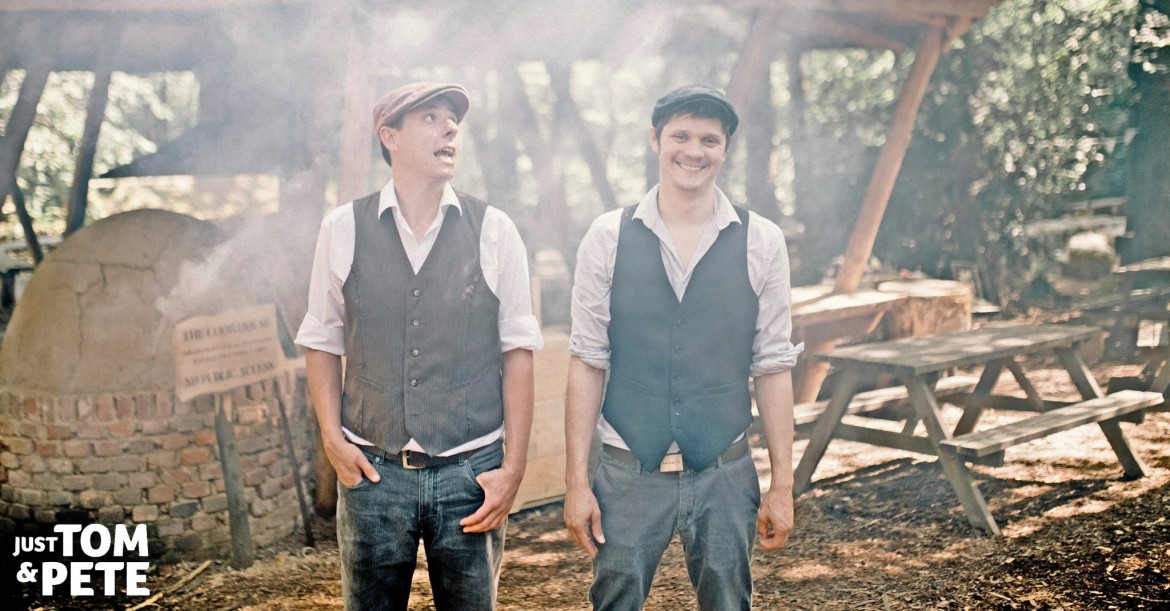 You’ve travelled all over the world to perform. Where has been your favourite place so far?

Pete: We have been really lucky with some of the places we have visited, so it makes this a tricky one. In terms of venue for a live show then I would have to say the villa in Tuscany. We played open air in the courtyard of this huge property that had the most amazing views over olive groves. It was May and the weather was perfect with all the stars out above the tree line. In terms of just visiting then probably a place called Half Moon Cay in the Caribbean. It had the most amazing sand and the clearest waters I have ever seen in my life (and I don’t really like beaches!).
Tom: Cape Canaveral for me. Music performance wise, maybe Devon.

Who takes the longest to get ready?

Pete: I think it’s probably me, I like to have enough time to settle before playing. Will be interesting to see what Tom says but I think he would agree.
Tom: Definitely The Pete Show, but he is better at turning up on time.

What is your favourite song to perform live at the moment?

Pete: Our version of Smooth Criminal by Michael Jackson. It’s a great song and I love the percussion part I have for it. I get to show off a wee bit.
Tom: ‘Sex On Fire’ (when we get it right and climax together).

Who would win in a game of Jenga?

Pete: Not sure. Tom might win because he tends to be a bit more of a risk taker than me, but then again that might be his downfall.
Tom: I assume me. Pete hits things for a living and wouldn’t be able to stop himself from knocking them all over in an involuntary percussive impulse.

Who would last the longest on a deserted island?

Pete: Tom, he is the more adventurous one.
Tom: I’m going to say me as I would probably see it as a holiday for longer. 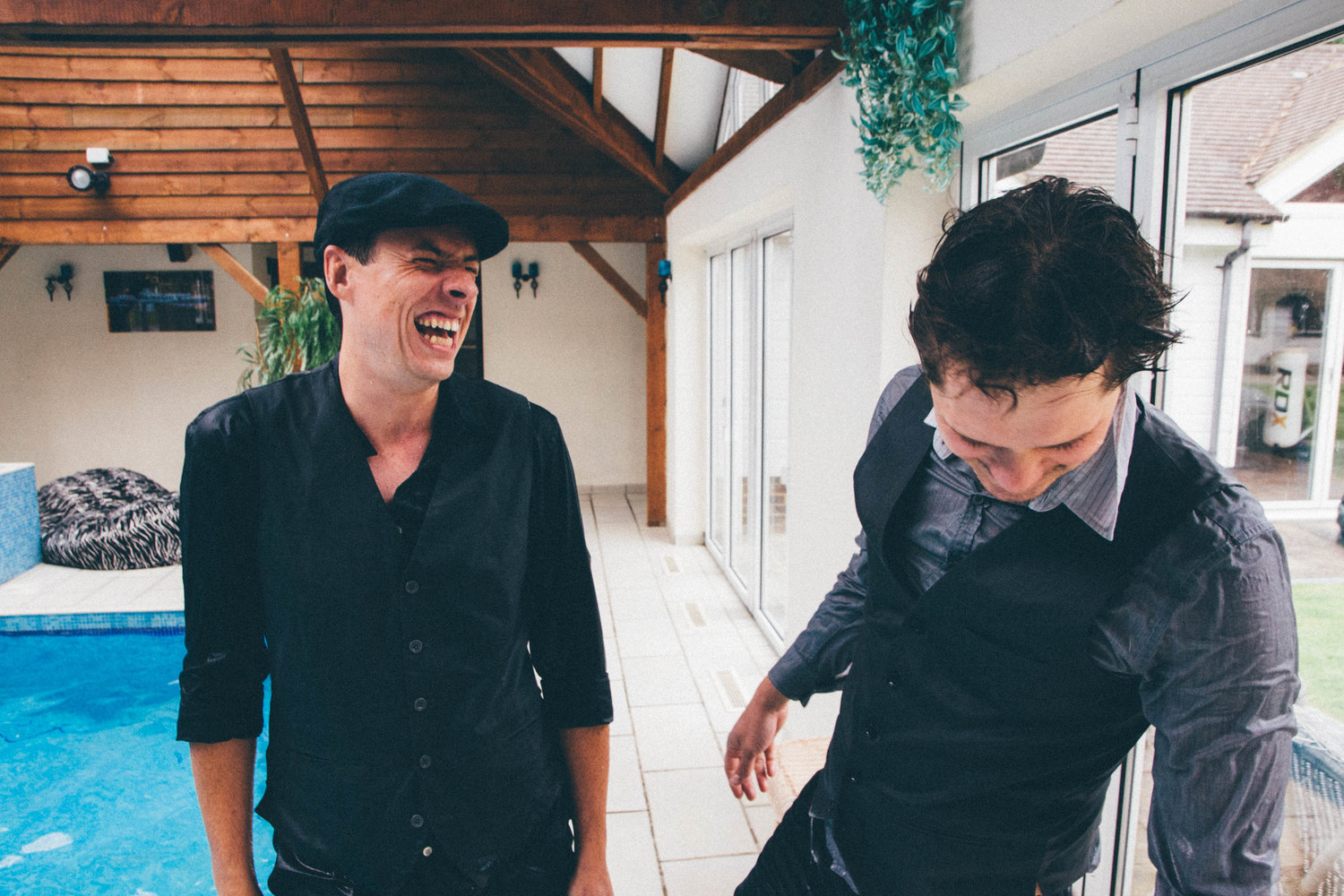 Where can people find out more about you guys?

You can find Just Tom & Pete on Warble, check out our website and of course follow us on social media!

Yep, 2019 is going to be our biggest and busiest year yet!
The biggest news is that we are going to be the tour support for Hayseed Dixie on their entire March UK Tour. Don’t know who Hayseed Dixie are? Check out www.hayseed-dixie.com to see. It’s going to be a really great experience and we are very excited to play some rather large venues. We are also planning the release of our debut album titled ‘Can’t Cut The Mustard’ due out mid March.

Discover more inspiration at Warble Entertainment and get in touch for advice on planning your wedding entertainment.

The MP3’s laying down some awesome tunes from home! Nice one guys! 🔥😍 youtu.be/VgbRNg4v_4M

We’re in love with Jareth’s voice! 😍 Jareth prides himself in creating your very own live lounge experience, taking on requests outside his usual set list 🙌 warble-entertainment… youtu.be/GK4c6oU-VTE