La Tinto Bros are a blend of South American and British musicians that have enchanted numerous audiences all over the world. 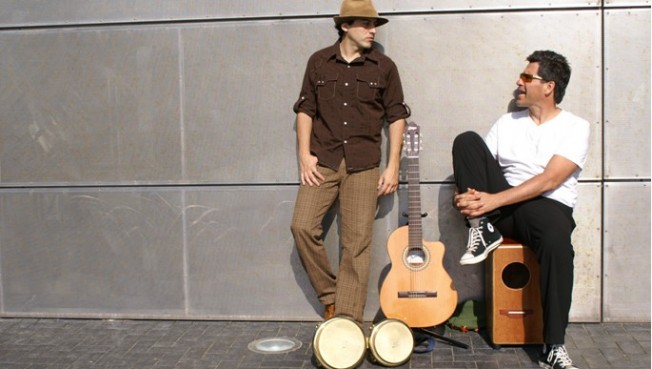 In the course of an evening, the audience will experience captivating performances of delightful enchanting Latin flavours including the sounds of Boss Nova, Cha-Cha-Cha, Salsa & Merengue.

La TINTO BROS has become well known for its accomplished native musicians, lively evenings and authentic Latino rhythms. The band is incredibly versatile and the musicians can play a variety of styles (salsa dance, Latin jazz) to suit any venue and audience.

Their repertoire can be performed by two musicians for small venues but can add a dynamic horn section and expand to an 8 piece Big Band or beyond for a massive, show-stopping performance!

As an added bonus, La TINTO BROS will often feature Salsa Dancers as part of their performance, so you can be sure they will be having your guests dancing in no time!

If you are looking to spice up your next event, LOOK NO FURTHER… Funky Latin Jazz Salsa Band La TINTO BROS will certainly turn up the heat!

James Vielma: Born in El Valle, during ‘63 in the city of Caracas, Venezuela, James Vielma’s musical beginnings happened by chance, in the basketball courts of El Barrio. James watched a samba class drumming in a nearby building, and stared at the group from across the stairs. His parents wouldn’t let him go, because it was very late; and they worried that it was too dangerous for a young boy to go out at night. Inevitably from there he got into the world of music and percussion. He started learning like many other musicians by playing in the street Salsa, Merengue & other Latin rhythms playing with different bands timbals, bongos, congas and vocals. When he went to the University of Los Andes, in the city of Merida, Venezuela, he was called upon to play with different salsa bands, ensembles and rhythms. This paid for his engineering studies.

In the UK, he became a teacher of percussion and organized different afrovenezuelan and afrocuban courses in the Cervantes Institute in Manchester. He created an interactive on-line percussion course for beginners and potential drummers; he worked with the NHS in Manchester, conducting courses of percussion for youths with severe problems of paranoia and schizophrenia;  he played with various well-known bands like Soncaribe, Descarga, Animal Jazz, Cubita, Mojito, Blukana, (performing in festivals such Festival Europe 2004 and events like the Commonwealth Games, The University of Manchester, The Lowry Centre in Manchester); he performed in recording sessions  with the BBC and in Brunei.

Daniel Alvarado: Born in Lima, Peru in a spring day of 1974, for him music has been always a remarkable part in his life, at the age of 6 he started to play the flute and in high school he discovered the amazing sounds of the panpipes and Andean music forming his first ever band where they performed the traditional Andean Latin American music with pinepipes, quenas, guitars, percussion and charango. As a youngster he learned to play the guitar and became a street musician in the bohemian town of Barranco (Peru) where started to create his own music which was a mixture of Latin pop with salsa beats. He travelled around Peru performing in bars, pubs & on the streets to just him and his guitar, an experience that helped him to learn more about music and his own country. His personality (a blend of musician, artist, bohemian and gipsy) pushed him to explore further lands and in 2001 he decided to leave South America crossing the Atlantic to Europe and then UK.

His experience as a dynamic vocalist and his guitar playing attracted the attention of very well known Latin bands in the North West such as Salsa pa’ Gozar, Son Caribe, Mojito & Blukana and led to him being invited to perform with them several times.

Daniel & James joined forces to create the ultimate Latin band in the North West: La TINTO BROS. Latin Funky Salsa Band and the history is still to be continued…

I just wanted to say a big thank you for the booking this afternoon - the band "La Tinto" was excellent and feedback was fantastic.

1
Gloucestershire
K'Chevere are one of the UK's most spectacular Latin bands, based in Bristol.
From

3
Shropshire
Diversion are a lively party and function band that infuses Mediterranean and pop music.
From

1
Manchester
This Manchester-based band is experienced in providing Latin music for all types of events, from corporate affairs to festivals and weddings.
From