The Singing Waiters and Waitresses

Over 2000 shows in 30 countries! Surprise and tantalise your guests with The Surprise Singing Waiters and Waitresses! 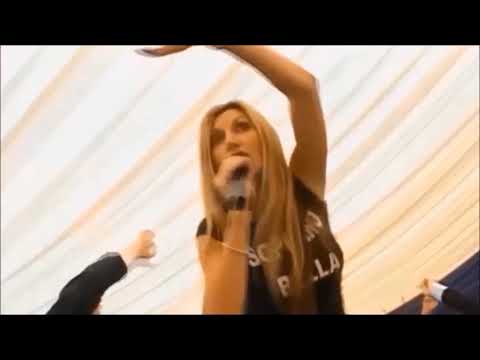 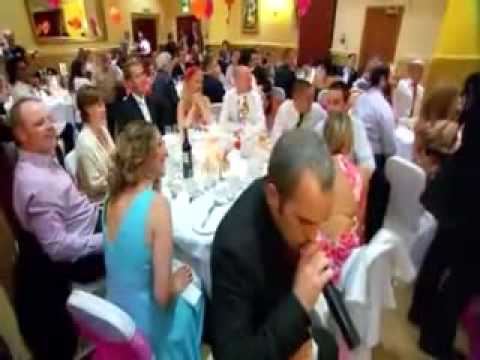 The act consists of a singing chef, waitress or guest, and you can choose between 2 singers (2 little maids) or 3 singers (3 little maids).

The Two Little Maids: This act contains the Singing Chef and Maître d’ characters. The Maître d’ appears throughout the whole of your meal, making sure your guests truly believe she is in charge of the catering staff at your event. At some point during the meal she makes an announcement that the Chef who prepared the meal, will be leaving the catering company to return to her native Italy. She brings up the Chef, who very bashfully thanks her and the catering company. She then seizes this as her opportunity to do what she has always wanted to do - and bursts into song!

The Maître d’ catching the end of the Chef’s display, storms up to her and banishes her back to the kitchen. She insists that she must somehow make up for the Chef’s behaviour by bursting into song herself! The Chef returns and confronts the Maître d’ and the act continues with witty dialogue, audience participation and hit songs from the world of Musical’s and Opera.

The act lasts for approximately 30 minutes.

The Three Little Maids: This begins in the same way as The Two Little Maids but with the added option of having a Singing Waitress or having a Planted Guest on one of your tables, to really surprise your guests!

With the planted guest, it is pre-arranged that they have a believable disguise agreed with you beforehand, so that the people on their table really believe that they are, for example, ‘a long lost cousin who has been living in Australia for the past 10 years’!

She watches the Maître d’ and Chef’s performance, gradually getting more and more irritated and decides that she can sing better than the two of them put together and is going to show them how. She then produces a microphone from her hand bag and bursts into song from your guests table and joins the act. The ‘Guest’ is also available as a male option, which works fantastically and adds another dimension to the act.

All of the artistes who work for The Singing Waiters and Waitresses have been specially handpicked for their wonderful and versatile voices, as well as being fantastic performers. They have all played LEAD roles in West End shows or have performed with leading opera companies.

By The Singing Waiters and Waitresses 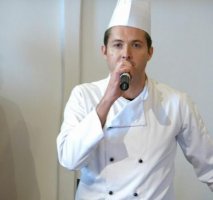 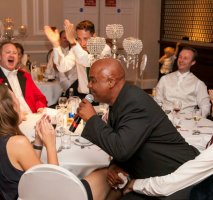 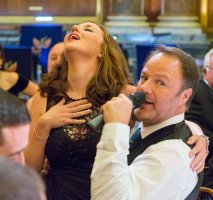 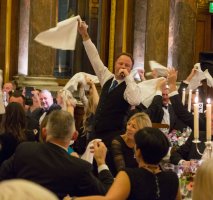 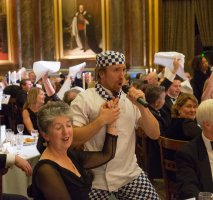 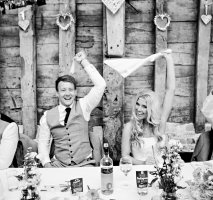 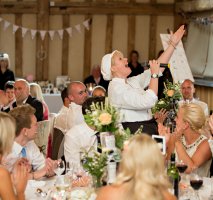 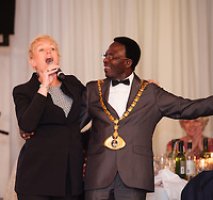 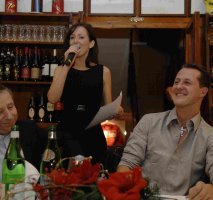 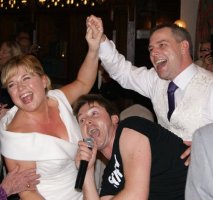 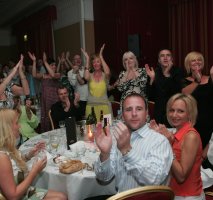 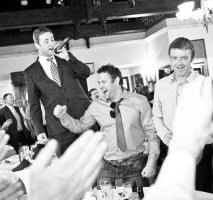 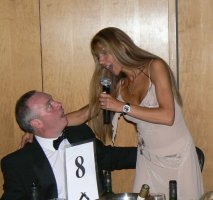 The Singing Waiters and Waitresses were excellent and exceeded our expectations - it was a total surprise to my wife and all of our guests thoroughly enjoyed the act and I would be very happy to pass on recommendations.

Excellent, accommodating, professional. A pleasure to work with.

Just sensational. Didn't need any guidance or help on arrival, which made my life easy organising the rest of the event. When they started the entertainment, it was enjoyed by all conference attendees. I loved how they got everyone enthused and engaged! Thank you very much for an enjoyable time. Thanks Sam at Warble as well, you’ve been great too, on the Ball as they say. Thanks for all your help, and we’ll definitely be in touch for our future events.

Ready to book
The Singing Waiters and Waitresses?

The Singing Waiters and Waitresses are also able to offer the following acts:

Solo Weddings Service - The Singing Waiters and Waitresses can provide a beautiful Soprano to sing Classical arias, Religious song’s and Romantic Love songs for your wedding service. The soloist can sing up to 5 songs for you during your service and will arrive self-contained with small music system and quality backing tracks. Alternatively, the singer may be accompanied by the church organ if you prefer. This option is perfect for both Church and Civil ceremonies.

Wonderful West End and Opera Gala - This really is for the connoisseur of Musical’s and Popular Opera containing Great Singers and Performer’s rolled into one! The act contains a combination of 1 Male and 2 Female singers or 2 Male and 1 Female singer performing hit songs from West End Shows, such as ‘The Phantom of the Opera’, ‘Les Miserables’, ‘My Fair Lady’ and ‘Chicago’, as well as Opera favourites, including ‘Nessun Dorma’, ‘La Donna Mobile’ and ‘The Flower Duet’ to name but a few. Usually performed in 2 halves of 30 minutes each.

Tailor-made Shows - The Singing Waiters and Waitresses are also able to create especially themed shows specifically for your event. They have previously created shows such as ‘Moulin Rouge’ with 5 dancers and a contortionist and most recently a show called ‘Shaken and Stirred’ for a James Bond charity ball. Here Katrina Murphy sang a selection of the best James Bond songs with 5 Bond girl dancers, a Ballerina on point and a Martial Artiste!

The Singing Firemen - This is a new and exclusive act to The Singing Waiters and Waitresses. The act begins when 2 fireman enter the venue during the event. They are there to check that the venue is complying with Fire Regulations and check the Fire Exits and the Fire Extinguishers. They decide the venue does not come up to scratch and they make an announcement to everyone that the event must be closed down immediately because the venue has not passed the Fire Regulation requirements. The Head Fireman exits to speak to the manager and while he does Fireman 1 decides that before they are closed down, he will seize the opportunity to burst into song with a fabulous operatic tenor voice, while he has the audience’s attention. The head fireman returns to catch him at it and decides to join in the act, trying to outdo his singing talent with his own. They pull up an unassuming guest or waitress to sing with them who also turn out to be a wonderful singer!

A hilarious act with music from ‘Nessun Dorma’ to ‘Saturday Night Fever’. Your guests will love it!

104
Warwickshire
Undercover Singers combine the talents of West End performers to bring you the best 'secret entertainment' for your event.
From

34
London
The perfect surprise entertainment for your event, performing an impressive range of music with a set list designed to excite any audience!
From

22
UK Wide
Planning your next event and looking for an inspiring musical twist? Then look no further than the Supreme Surprise Singers!
From