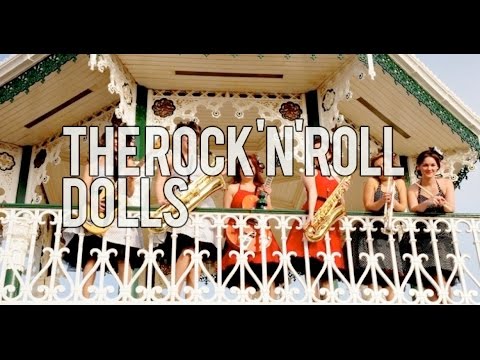 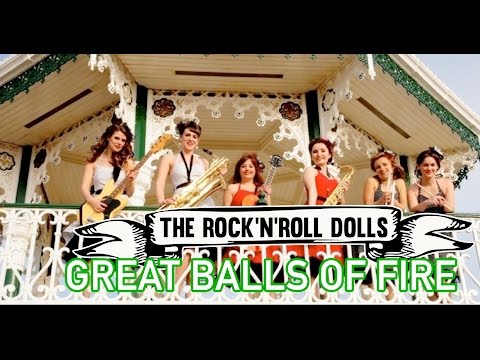 If you really want to step back in time to the 1950s, but with the same excitement of brand new songs you know and love, then look no further... The six polka-dot dressed girls in this new rock 'n' roll band all sing and play drums, guitar, bass, trumpet and tenor and baritone saxophones!

As well as being accomplished musicians, the girls are all experienced performers, having played in theatre shows such as 'Dreamboats and Petticoats', 'Return to the Forbidden Planet', 'Carnaby Street' and 'Save the Last Dance for Me' on National Tours and in London's West End.

The band plays fantastic new arrangements of new and old songs, ranging from Paulo Nutini and Eliza Doolittle to classic rock 'n' roll. Having played at The Grand National and at events ranging from footballers' weddings to festivals, these girls were recently voted 'Best Band' in the London Vintage Awards!

By The Rock 'n' Roll Dolls 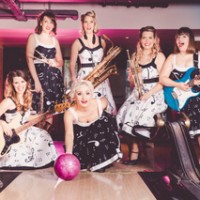 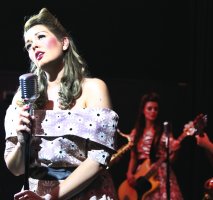 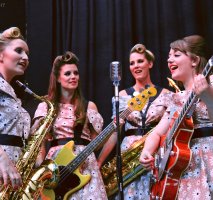 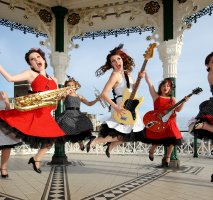 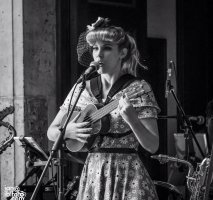 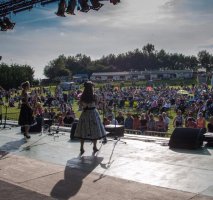 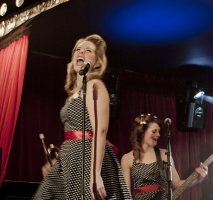 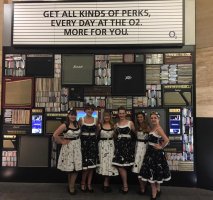 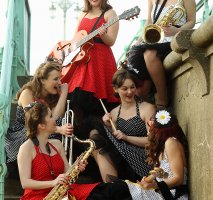 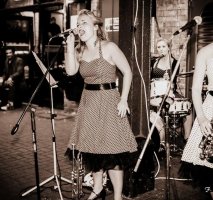 The girls were fabulous and we really enjoyed working with them. The Chelsea Pensioners thoroughly enjoyed them and really got into the spirit of the performance. We look forward to working with the band again soon. Please pass on our thanks to them all for a fantastic night.

Hi Emily, both Vali and I had a fantastic day which was greatly enhanced by both the "Silly Waiterâ€ and the "Rock n’ Roll Dollsâ€. Mark was incredibly entertaining and performed with great energy and some sensitivity throughout :-)) which was exactly what we wanted. He had our guests in fits of laughter and made what was already a brilliant day even better, very well done him….. The 'Girls’ were fantastic; the look, the music, the energy were all exceptional. They performed incredibly throughout the evening and the dance floor was permanently full which is, in my mind, always the biggest tribute. Many thanks to one and all, With kind regards and best wishes, Richard and Vali

People have not stopped talking about my party, especially the all girl band. They all wanted to know where I found them. Your presentation was dazzling and the music had everyone dancing from the first song to the last. Even one or two slightly older and reserved guests could not resist the temptation to get up and boogie. Thanks girls for making my special day such a memorable occasion.

What is The Rock 'n' Roll Doll's line-up?
The girls play Trumpet, Tenor Saxophone, Baritone Saxophone, Electric Guitar, Electric Bass and Drums. The girls all sing lead vocals as well as close harmony backing vocals. A girl Trombone player/Vocalist can also be added to make it a 7 piece band if required or a Piano/Vocalist to make it an 8 piece!

Can the band learn a song to play for our party?
Of course! All of our songs are especially written for The Rock 'n' Roll Dolls and we are happy to add a bespoke arrangement for you for your special occasion. We are also happy to organise a song to walk down the ailse to - please get in touch for more details. We recently played 'At Last' by Etta James as a first dance request. Instead of it staying as a slow dance, we whacked up the tempo half way through, added some screaming brass, killer rock 'n' roll vocals and the crowd was rockin'! One happy couple! We only ask you give us some notice before the event to organise the arrangement for you.

What happens when the band are not playing?
An MP3 set of mellow background music is played during dinner (if required). During the gig the girls will seamlessly end their set and start the playlist of recorded 50's music to keep the party going!

7
London
Memphis is the ultimate party band and will bring a memorable, sizzling energy to any live performance.
From