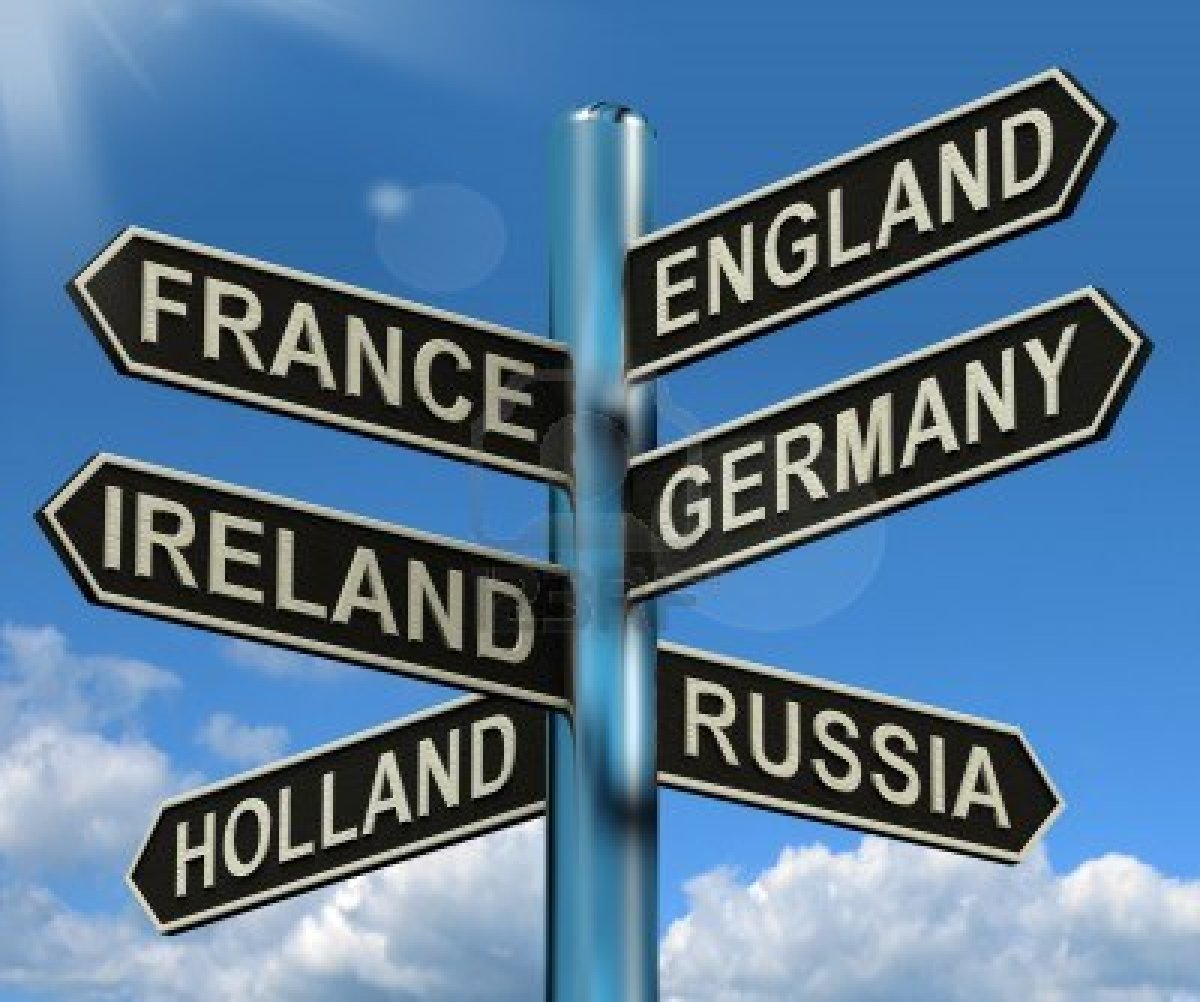 Black Cadillac have been operating for 4 years or so now as a quirky vintage function band. The term ‘function’ covers a wide variety of event types, primarily weddings, but also corporate work such as branding for an event or launching a new business venture. Up until December 2012 we had been operating solely in the UK, since then we have been booked for a number of events in Europe with varying restrictions on budget. This article will outline the options available if you are getting married or staging an event abroad and you want to take an English band over there with you. 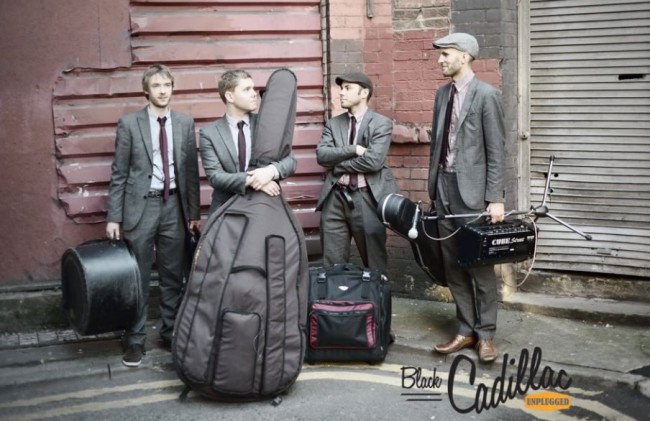 Our first venture into work abroad back in December 2012 was actually an office party in Brussels, Belgium. It was an extremely lengthy and arduous process as it was the first time we had organised an event of this nature. The company wanted to fly us out to Belgium and had already got Ryan Air in mind for the flights and a hotel called The Aqua Hotel (with an impressive giant water feature in the central lobby). Although this was all very organised it caused a few problems as Ryan Air are not a great airline for musicians, with their strict policy on the size of baggage you can bring onto the plane. This meant that we had to just get ourselves over to Brussels, with the plan to hire all the equipment we needed from a company near to the office where we would be playing. This is where the fun started for myself in sourcing such a company…

The band eating out in Brussels

The language barrier wasn’t as difficult as I thought. People in Belgium (in my experience) generally speak English so I received a number of readable quotes from companies I contacted by e-mail. The problem was finding a company that did everything we needed. It was easy to find a company with PA speakers and microphones etc, it was not so easy to find a company that hired out guitars, drums kits and keyboards. We eventually found a company called ‘Tour Support’, this name should have rung alarm bells but they were so helpful and had all the equipment that we needed so we approached the client with their quote. In the end, the hiring of this equipment cost the client the same amount as hiring the band. The ‘Tour’ part of the name that didn’t ring any bells presented itself in the form of equipment large enough to play a small stage at Glastonbury… inside a small 30 person office. At this point we realised the language barrier may have been more of an issue than we first thought. In addition, the ‘Corporate’ nature of the event passed the sound technicians by as they sat in the middle of the event in their hoodies and baseball caps laughing at photos on Facebook through their laptop. 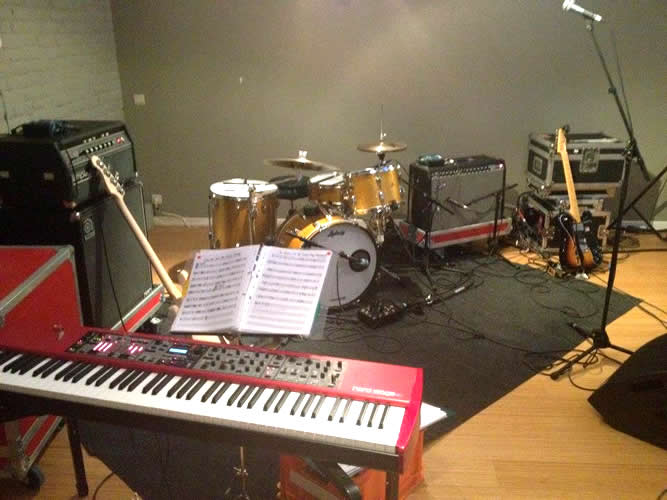 We very quickly explained to them how they needed to conduct themselves in such an environment! The gig was a success however and the client was very pleased. The purpose of the event was to raise the profile of the business, importing a band from the UK went a long way to impressing their potential clients we were later told.

So this is one of the options for a European gig with an English band, fly over the musicians and hire all the equipment they need in the host country. This is by far the most expensive option for the client but can be very impressive and successful. 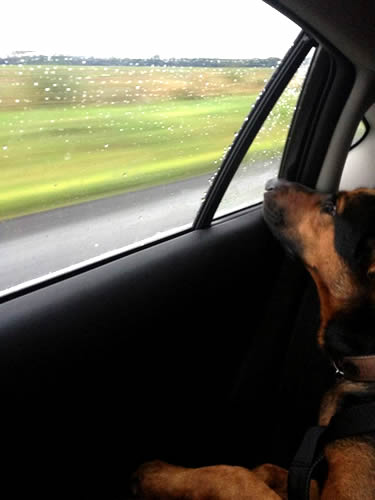 Ella in the car on the way to Bordeaux

On October 19th 2013 we tried a different approach when we played at a wedding in a beautiful chateaux in Bordeaux, Southern France. This time we were booked as Black Cadillac with the addition of singer Helena Scott from The Black Cadillac Sister Band. Three of the band members (Nick on bass, Andrzej on piano and Rob on drums) flew over to Bordeaux and hired a car to get from the airport to Chateaux Rigaud which, was less than 20 miles away. Helen and myself (as we are a couple) drove from Manchester to Bordeaux with all of the equipment in the car with the help of an enormous roof rack. It was a bit of a squeeze (especially seeing as we had our dog Ella in the car with us too! n.b. This was already agreed with the dog loving Bride and Groom) but being a couple we turned this trip into a holiday.

This meant we had around 5 days to get to Bordeaux, stopping in various places along the way, such as Paris, Rocamadour and Tours. 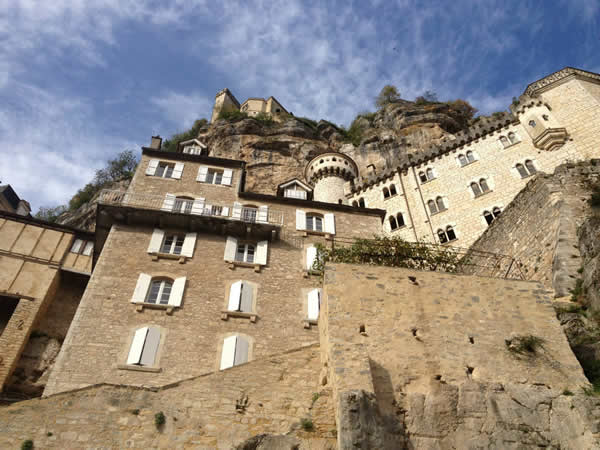 Stop Off at Rocamadour

We had about the same amount of time on the way back up, which made it into an amazing 10 days away for us.This showed in our performances at the wedding, which were full of energy and vibe. Here is a testimonial from the happy couple: 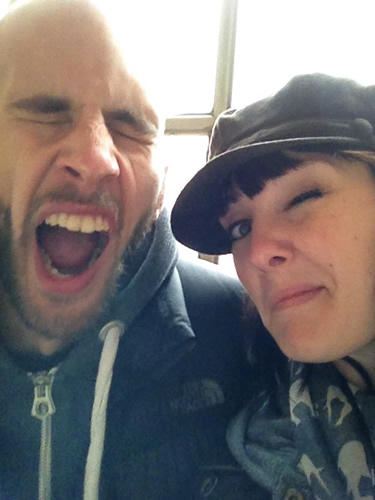 Paul and Helen Tired on the Journey

“Booking a band for a wedding in France when we live in Australia was always going to be a challenge… which is why we can’t thank Black Cadillac enough. Their enthusiasm, commitment and professionalism throughout the process made everything so very easy and enjoyable. We developed our setlists with them, they learned new tracks and having exchanged just a few e-mails they arrived in Bordeaux. The mood they set, from the busking on the lawn in the afternoon sunshine to the full set in the evening could not have been more perfect and they created exactly the atmosphere we were hoping for. They are a group of very talented singers and musicians and they were such an integral part of making our day so special, we cannot recommend them highly enough.” 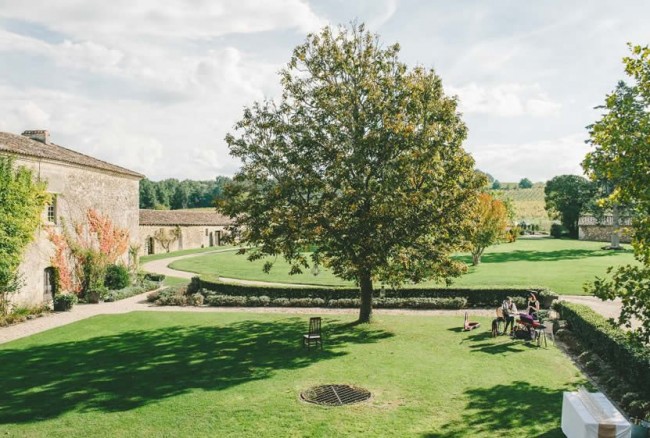 This option was much cheaper than hiring the equipment in France… and we thoroughly researched this claim. For this option to work, it would however rely on band members having no gigs either side of the event, as the drive to the South of France is not a quick one, even without the extra days Helen and myself took to make it more pleasurable. The advantages of this option are reduced cost and the knowledge that the equipment will both be appropriate and reliable for the event.

Recent Blog of this wedding: http://www.stylemepretty.com/destination-weddings/2014/03/27/france-wedding-at-chateau-rigaud/

We have been booked to play at another wedding back in Bordeaux in May 2014. We are going to be trying out a third option which involves flying with British Airways. This is the most musician friendly airline, as their baggage allowance and dimensions allow you to take guitars, drums and even double basses on the flight. There are very little, if any, extra baggage costs to take instruments on the plane. This has meant that we have been able to fly over with acoustic instruments to play at the wedding: our Unplugged option (which many bands may be capable of doing). On the plane we will take an acoustic guitar, accordion, electric stick bass (like a double bass but smaller) and a small drum kit.

In Bordeaux we have hired a very small PA with microphones and leads included and a small lighting rig. This has been very simple as we found a number of companies that offered the equipment we wanted, which gave us the chance to haggle a low price. This is by far the cheapest option of the three we have tried, the only downside could possibly be a slightly quieter band (as we can’t take amps on the plane) but if the Wedding in October 2013 was anything to go by, this will completely fit the mood. With the sunshine beating down our band will be able to play outside also (with a simple extension cable for the 2 PA speakers) which will undoubtedly be a memorable feature of the wedding for guests.

So it isn’t out of the question to take a British band abroad, it just takes some planning from both the wedding party and the band. If you have a helpful venue that have done this before, or a band who have also attempted it before, then you are already a few steps ahead. In terms of ease for the band, flying over with some of their instruments on British Airways is probably the most favourable option. Although BA flights are more expensive than a budget airline, it will save a lot of money on hiring equipment (usually between £100 to £200 per instrument). If your venue already has a sound system that can be used for a band, then the process is quite straight forward. All you then may have to think about is transporting the musicians from the airport and finding some cheap accommodation that allows them to bring their overall quote down for you. At the end of it all, musicians love the romance of being asked to play abroad, and if the numbers add up they will do all they can to keep their diary free to make it happen. After all, we are musicians first and foremost for the lifestyle and not the bank balance!

Getting married is not something you do every day. Let alone in the middle of a pandemic. We caught up with Vicky to find out what it was like, their experience with having a live band and advice for anyone else! ❤️🥰 warble-entertainment… pic.twitter.com/TTb2…

The Classics are made up of some of the finest young Rock ‘n’ Roll musicians in the country 🎙️ Each member of the band was raised on 50s music and it certainly shows! 👏 Look here for more info 👉 warble-entertainment… youtu.be/hu73vNgmiWs

Awesome feedback for Dave Plays Saxophone! 🎷😍 Our acts are doing us proud whilst performing at parties with limited numbers this year! 🎶🙌 "Dave was amazing at the party and is a great sax player! He was such a lovely and accommodating guy too. Highly recommend!" pic.twitter.com/dZla…

Stevie And The Sunshines are here to help you celebrate your event in style! 🎶 Complete with 4 incredible musicians, a show-stopping set list and stunning vocals, it's no wonder these guys are so popular! 🤩 Don't miss out! 👉 warble-entertainment… youtu.be/g165e5bNswE