With his amazing voice and uncanny resemblance to the king himself, Lee is one of the best young Elvis tributes acts in the UK 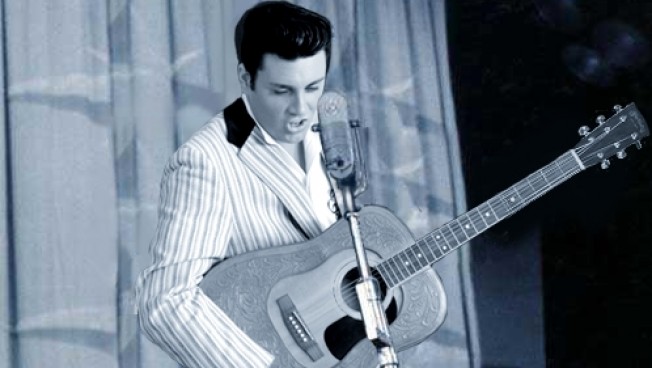 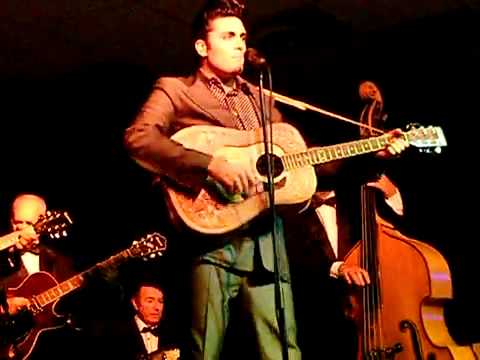 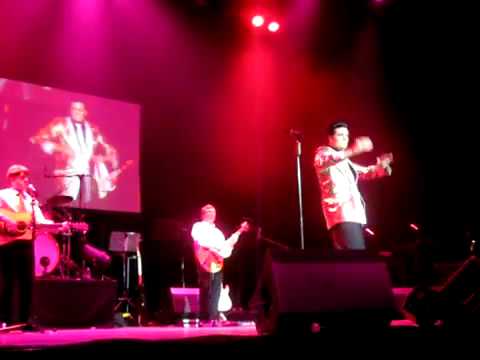 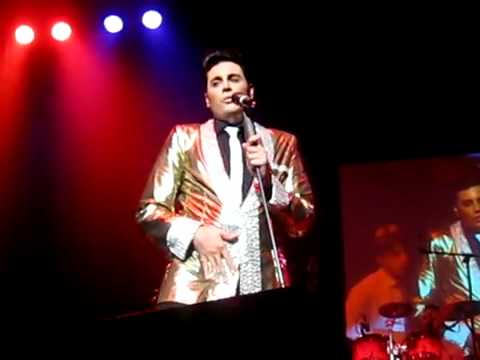 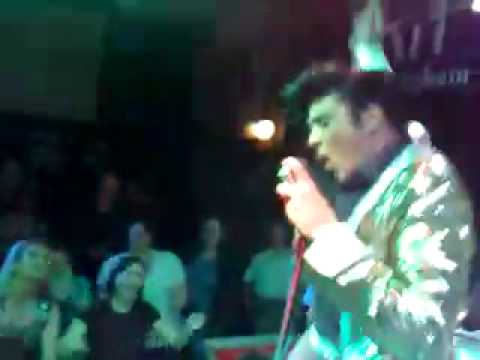 Where does Lee differ from the many thousands of Elvis tributes around the world?

He is young, he has the looks, the eyes, he wears the clothes, he sings and plays the guitar – Lee is… The Young Elvis.

Lee, as Elvis Presley has something a lot of Elvis impersonators do not have… the looks! Lee causes a stir wherever he goes in or out of character and people just cannot believe the natural resemblance to the king himself.

Add the looks to his speaking and singing voice backed by his fantastic 1950's rocking band and Lee is the ultimate Elvis impersonator.

Due to the amazing impact Lee has on the audience, he was chosen by the Radio Times to receive an award on behalf of Elvis – Lee is not your typical ‘Elvis in a white jumpsuit’. Lee is the closest you will get to feel what its like to have really seen the king of rock and roll. 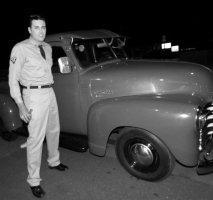 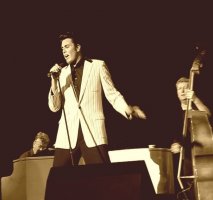 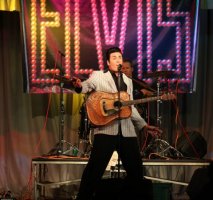 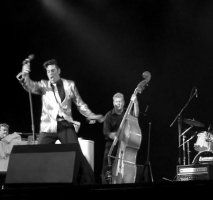 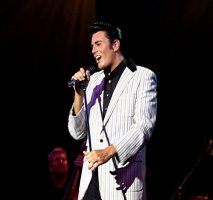 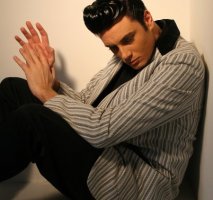 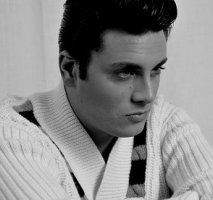 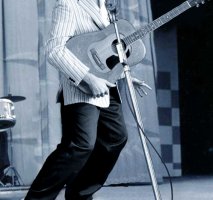 All The Elvis Presley Hits...

Lee was absolutely brilliant performing for my Mum's big birthday. Our guests really enjoyed his performance and took the time to pose for a couple of photos with us too. Thank you very much!

Fantastic!! Elvis was definitely in the building. Everyone loved Lee’s act. Thank you.

Lee was a fantastic part of our wedding. We weren't sure if everyone would dance straightaway but the dancefloor was packed with guests old and young when Elvis began to play! Our first dance was extra special as Lee sang the lesser-known Elvis song we requested making it totally unique. Lee was also extremely nice and easy-going. When everything was overrunning he was able to adjust his set and was very patient as we tried to keep him a secret from our guests. His actual performance itself was fantastic - he has the looks and the voice, the whole package!

Fantastic night enjoyed by all and a very impressive look-a-like will definitely let others know if they need an Elvis then Lee is the man to have, thank you again!!

Fantastic performer, the crowds loved him and in addition, a very nice person.

Lee's set up and performance was great. Really good feedback.

Hi Emily, I would just like to say a BIG thank you. Elvis and his band were absolutely brilliant :-) Nothing was too much trouble, he didn't mind chatting and having photographs taken with my guests. His performance was second to none!! He looked, sounded and moved like the real Elvis. He was the talk of the party!! Best thing I've ever booked. Already trying to think of another occasion so I can book him again!! Thanks again Emily for all your help, Kay x

Lee and his band were simply fantastic. They were friendly, professional and above all hugely entertaining. Every single wedding guest was on the dance floor, some never left! Lee was excellent as Elvis and his band sounded amazing. We are extremely grateful for how easy they made the whole evening. All we did was point them in to the room and they set up quickly with minimal fuss. They then played a set that will always be remembered by our guests. I couldn't recommend them highly enough and hope to have the pleasure of seeing their act again soon. Thanks to Lee, the band and Warble Entertainment!

WOW. This guy and his band are classy and incredible. Lee totally blew our guests away at our wedding reception party. Some got up and danced, some sat down in pure amazement of his looks and his sound, he even talks like Elvis. Some of my older guests said it was like stepping back in time. Lee as a guy is so down to earth to talk to, really nice guy. The DJ said it all at the end of night. "Ladies and Gentleman give a cheer for Lee, that is the best Elvis tribute I have ever seen". Echoed by our guests and might I add some people who weren`t Elvis fans beforehand, are now. Thanks again Lee. Warble Entertainment thanks for great communication and the ease of signing contracts etc. Ben & Debbie.

Lee was brilliant, he arrived on time and set-up quickly. He certainly looked the part, everyone was so excited about hearing him sing and we weren't disappointed. He was absolutely brilliant, he had the moves, his voice was spot on, and all the girls were talking about him! He made our wedding reception one to remember.

I booked Lee for my husband's 40th fancy dress surprise party. From start to finish the booking process was very efficient and a couple of week's before Lee's manager called me to ensure that everything was OK. When I met Lee on the night of the party (he had arrived a couple of hours earlier to set up) the first thing I thought was how gorgeous he is and how much like Elvis he looks like! The second thing I then noticed was actually how down to earth and thoroughly lovely he was to talk to. We decided to keep him as a secret so he very patiently waited next door hidden away for another couple of hours! When he finally did his set he was so professional and has a fabulous voice. All my guests loved him! He did the 68 come back special set. I have to say I only had him for 1 hour but wish he'd been on much longer. He was everything I'd hope for when hiring an Elvis and he was worth the extra cost. Young, handsome, funny, very professional and best of all really personable so happy to mingle with guests after for photos. Lee you are a true legend! Thank you for making my husband's party the best it could have been. You are a 10 out of 10!! Can't wait to come to one of your gigs and maybe get a chance to chat to you some more about Memphis!!

The booking process was simple and easy. Lee's manager contacted me 3 weeks before to confirm the details. I also sent a mail to him to confirm that we had planned a 50's theme and we were keeping 'Elvis' a secret. Lee kept out the way for us until he came on stage and surprised all the guests. The performance was superb, right from the start people were up dancing and getting into the swing. Lee must be one of the best young 'Elvis' impersonators there is, he completely lived up to our expectations and everyone thoought it was a brilliant night. There were many 'swooning' ladies and in fact probably some fella's too! We are so happy that we booked Lee and the band, it was tremendous and very authentic. I would not hesitate to recommend Lee for any function, but for our wedding he made the evning, especially with our 50's theme. He even allowed me as the groom to get up and play harmonica for a track, link here, http://www.youtube.com/watch?v=AvIb54iLe8s. Great night was had by all, many thanks.

3
West Yorkshire
Frankie Valli Tribute has a wide vocal and performance style that saw him win TV's 'Stars In Their Eyes'.
From

5
Essex
Phil and the band perform a 2-hour show, split between a tribute to Buddy Holly and great floor-filling rock and roll!
From

4
London
With his fantastic power and vocal range, Darren brings the house down with his tribute to the king of rock and roll!
From