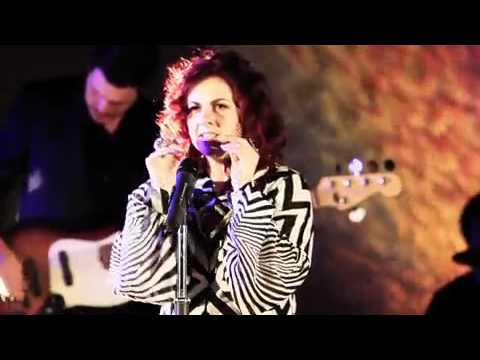 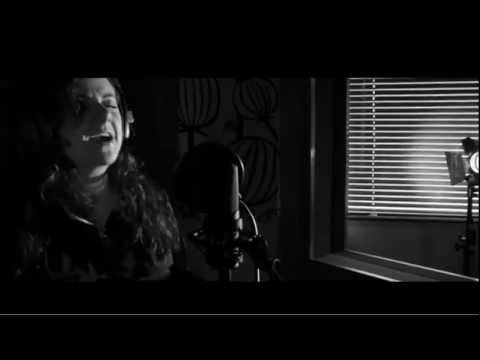 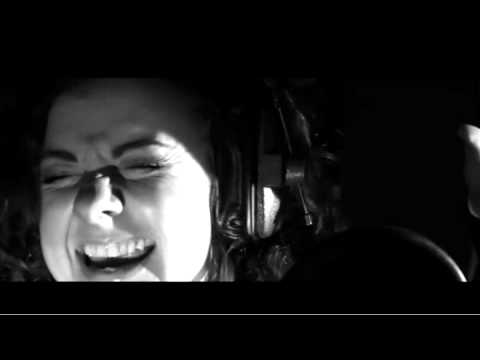 PLEASE NOTE: The Setlists are available in various line-ups from trio to 6 piece band. The fees listed are based on the trio line-up for mid-week bookings (Monday to Thursday) and comprise Vocals, Guitar, and Keyboards. Drums, Bass and Saxophone may also be added if desired. For weekend quotes and extra players please speak to a Warble booking agent. Sets can be tailor made to incorporate as much or as little of any style of music from their repertoire to suit each individual taste.

In June 2007 Sophie was the first ever artist to perform on the main stage at London’s O2 Arena (beating Bon Jovi to the stage by one week!) where she supported The Sugababes and McFly. She has also opened for Will Young and entertained the likes of Van Morrison, The Red Hot Chilli Peppers and even flew out to Paris to sing for the French President and his wife, actress Carla Bruni!

Sophie has appeared on many radio and TV programmes both in the UK and Europe and was commissioned to write and perform the music in a short film 'Lipstick' starring actor Jack Shepherd. Sophie also played the part of the cabaret singer in the film. She has released 4 albums to date and was the finalist in the Perrier Jazz Vocalist award competition.

She has a voice that she can turn to any style of music and is equally comfortable whether she is singing a rock anthem or laid back jazz standard due to her solid vocal technique. Sophie draws her influences from many different genres of music.

The rest of the band collectively have performed with: Danni Minogue, Mica Paris, Shirley Bassey, The Pet Shop Boys, Lisa Stansfield, Lulu, Dave Stewart,  Eartha Kitt, Gloria Gaynor, Marc Almond, and the late great Nina Simone and many others at prestigious venues such as the main stage at Glastonbury, The Royal Albert Hall and The O2 Arena. 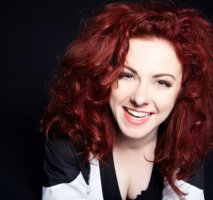 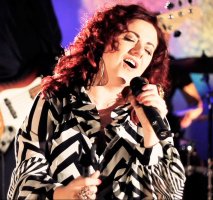 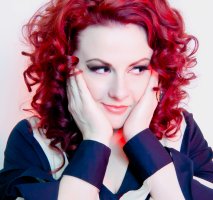 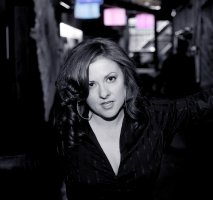 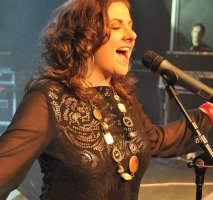 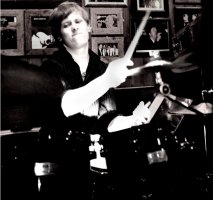 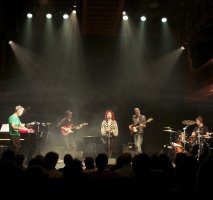 Absolutely brilliant. Everyone enjoyed their act, very nice people too. Sophie has a fantastic voice. Would have no hesitation in rebooking them for a future event.

The Setlists were amazing, everybody at our party said how brilliant they were, very enthusiastic and got everyone involved. Thank you very much.

The band were great and really friendly! They played the songs we wanted and kept the crowd happy. Thank you so much for making our wedding really fun!

The Setlists were great! Sophie was wonderful and got the crowd involved.

They were brilliant. We had so many positive comments on how much everyone loved the music. Sophie and the band had great charisma which made it very special, so glad we picked them for our wedding. Thank you.

We were tremendously happy with the Setlists. Their upbeat style and the great set of music was ideal for the people we had coming. We both thought the way they interacted with the crowd was really fun and made it more of an experience! The quality of the vocals/guitar/everything was awesome and they provided us both with some great memories of the day. In addition, they went above and beyond the call of duty to ensure our day ran smoothly, downloading our first dance song when we mislaid it on our iPod! Some people mentioned that they had never gone to a wedding where so many people were up dancing so early – which is surely testament to the great job the Setlists did at performing such great quality music that people actually wanted to dance to!

Hi Sophie, I'm sorry this is so overdue but we have had a manic year. You performed at our wedding in August 2013 at St Audries in Somerset. It took me such a long time to find the right band and you truly blew us all away. The musicians were amazing and your singing out of this world. It made it especially special how you let everyone get involved, especially one of our Ushers on the tambourine (do you remember Bob?). We just wanted to say a huge thank you for singing your socks off and making every song sound like it was your own. Your all really talented and I'm so glad the months of searching paid off as the whole wedding party couldn't stop talking about how great you all were. Thank you for helping us create such wonderful memories. Take care and all the best for the future, Stacey & Ian Moyse xxxx

Hi Sophie, we just wanted to say a huge thank you for being absolutely fantastic from the moment you arrived at our wedding on Saturday. Everyone commented on how amazing the band were and we were so impressed with your ability to get the balance so right that it ensured both young and old were dancing throughout the night. All the band were extremely friendly and amazing musicians and you all helped to make our wedding day the best it could possibly be. We couldn't have asked for more! Thank you again.

We would like to say a personal thank you to Sophie and The Setlists for the fantastic performance they gave at our wedding. Sophie's voice was incredible and the band were great. We had many complements from guests to say how much they enjoyed the sets, and it was great to watch Sophie perform an impromptu duet with our Master of Ceremonies and cheer on the dancing competition between our drunken guests! We agreed in advance the songs we would like the band to play, and The Setlists provided two up-beat and varied sets, that suited the wide range of guests we had in attendance. I would not hesitate to recommend The Setlists for future weddings and events.

Sophie and her band were brilliant! She's got a great voice and they got everyone dancing - just what we wanted. We couldn't have asked for more and couldn't recommend them highly enough!

Sophie was really helpful and friendly leading up to the wedding and amazing on the day. We used Sophie and the guitarist during the ceremony and they were both fantastic. The guitarist played an acoustic set during photographs and the full band played during the evening. They are a very professional band and Sophie's voice is fantastic. We can recommend them highly and wouldn't hesitate to hire the Setlists again. Thanks.

Hi Sophie, we just wanted to drop you an email and say how much we enjoyed our day and how much we loved having you there. You really made it a very special occasion for us and it felt like having a friend there. We will of course leave you a glowing review with Warble and will recommend you. Colin and Sally (who you were chatting with) have already asked for your details. We can't thank you enough for being so professional and friendly. You were amazing and the guitarist was fantastic in the service and during the photograph marathon. We hope we can hire you again in the future.

Great band. Sophie is a fabulous singer and has a personality to match.

Sophie and the band were even better than we expected. It's rare to find a band that can keep the whole party dancing for the entire evening... but they did! All age groups thought the band were fantastic and this was evidenced by the many requests for encores at the end of the night. Sophie worked with us throughout to make sure we were comfortable with the set lists for the night and was also very accommodating around our decibel limiter requirements. Sophie is a very talented artist and we were also really impressed by the musicians in the band. We were blown away - thanks very much.

Jennie, I know it seems like it was ages ago but just wanted to respond and say how wonderful The Setlists were. They were 100% professional in all respects as well as being jolly nice people to deal with and have at the event. I wish them all lots of luck in the entertainment business and look forward to hearing great things from Sophie in the future.

Ready to book
The Setlists?

Q: There are certain songs on your play list we really want included on the night is this possible?
A: Of course. We involve all our clients in the set list choice for the performance.

Q: What do you provide in a performance?
A: This is very flexible and is organised specifically around your individual needs, making every event completely unique. As an example, a typical evening event runs as follows: Starting at 8pm and finishing at midnight it would include either 3 x 40 min sets or 2 x 1 hour sets, with breaks in between.

Q: We have a DJ booked how will this work?
A: We normally arrange it so that the DJ plays in between our sets at times to suit you.

Q: We do not have a DJ what happens in between your live sets?
A: Simple - At no extra cost to you we provide recorded music in between sets. Some clients prefer to provide their own IPOD which can be run through our PA system. This is becoming more and more popular with clients who prefer to choose their own music and thus saving the added expense of hiring a DJ.

Q: I would like a band in the evening but also some background music during the day. Is this possible?
A: Yes, and we frequently get asked this. As an example we can provide solo piano or duo during a wedding ceremony or a corporate dinner, followed by full band in the evening. The possibilities are endless.

Q: What equipment do you bring with you?
A: We are completely self contained and bring all the electrical equipment and instruments with us. We also provide our own stage lighting.

Q: There is no stage at the venue. Is this a problem?
A: Not at all. We are happy to perform at floor level.

Q: What will you need us to provide?
A: The venue will need to provide a safe electrical supply to plug into close to where we will be performing. There needs to be a minimum of 2 x wall sockets. Preferably somewhere to change but this is not always possible.

11
Somerset
The Easy is a top live funk, soul and pop band from Somerset, playing the ultimate in upbeat party tunes.
From